Theatre and Drama major Shasparay Lighteard was profiled as one of UW-Madison’s “Notable Grads” for 2020!

Creating art spaces for herself and others 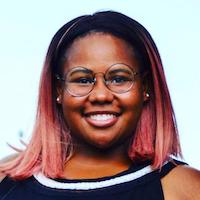 In middle school, Shasparay Lighteard wanted to be a stage actress, but the roles she sought didn’t always come her way. Then she discovered a neighborhood poetry slam. “For three minutes and 10 seconds, I was able to say my piece,” says Lighteard, of Austin, Texas. She learned a valuable lesson that day: sometimes you need to create your own opportunities.

At UW–Madison, where she is a First Wave Scholar, the nationally acclaimed poet founded and produced the inaugural Black Arts Matter festival. “I wanted to highlight black people in Madison while exposing the community to artists it didn’t necessarily know existed,” she says. A second festival is in the works. For her major, Lighteard chose theater, the medium that she felt had not fully embraced her as a child. “I guess I believe in myself enough now to come back to this world,” she says. Post-graduation, Lighteard will continue artistic pursuits. She also has been accepted to the arts administration graduate program at the Bolz Center at the Wisconsin School of Business. Her advice to others: “Create the space you want to see.”