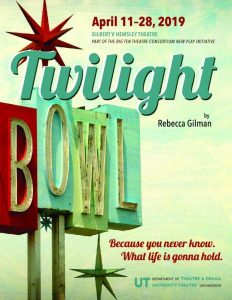 Rehearsal Schedule – you MUST be available for a 10:00 – 4:00pm rehearsal on the first Saturday of Spring Break (March 16th). Questions about this schedule, email Jahana at jazodi@wisc.edu OR stop by Vilas 6009.

SAM (Female, 18 years old) From Reynolds, Wisconsin. Accepted into Ohio State University on a bowling scholarship. She’s under immense pressure to perform well because if she is cut from the team, she loses her scholarship. She has classes, practice and a work study program bussing trays at a dining hall. Cool enough to her peers, unassuming, and fairly straight laced. She’d be the girl at the party who has fun while still being sober. Good Girl. Not susceptible to peer pressure. Her competitive streak helps her move beyond any fears but still expects the other shoe to drop. She feels her luck might run out. She has a way out of Reynolds and we all root for her to not squander this opportunity.

JAYCEE (Female, 21 years old) From Reynolds, Wisconsin. SAM’s cousin. Daughter to divorced parents, mom is an alcoholic and Dad is constantly asking JAYCEE to play the role of parent. We meet her as she prepares to serve time in jail for falsifying prescriptions for her Dad, who she thought was in pain. In reality, he then supplied high school students with Fentanyl patches. Jaycee has low self-worth. She has a hard time allowing herself to be vulnerable in the first act. If she pretends she can handle everything maybe she will survive her bad decisions. She is not equipped or prepared in any way to be serving time but she is pretending she’s totally fine. She isn’t. We worry for this young person whose life took an unfortunate path because she was trying to keep her parents afloat. It isn’t fair. When we see her in act two, she has made a complete 180. She is more confident in her authentic self and trying her best to live as a follower of Christ.

CLARICE (Female, 21). From Reynolds, Wisconsin. Has been working since she was 14 years old. She currently has two jobs to afford a place on her own. She thrives on independence. She uses quick wit and humor to deflect. Unafraid to speak her mind. She works hard to project the confidence she wants to have, but is deeply insecure. She works hard at being perceived as the “cool girl”. She is still learning how to own her sexuality but delights in being the one to shock her friends. She is the alpha in the group, she uses status as a protection and to keep friends at arm’s length. Has a bit of an edge to her, she can’t risk being vulnerable.

SHARLENE (Female, 19 years old.) From Reynolds, Wisconsin. She is a Christian through and through. Genuinely a good person. She isn’t cool but doesn’t care.She is the most mature of the group and has the most job security. She is charming in her own unique way. Reserved, doesn’t cuss, and doesn’t drink.Instantly lovable. She is a self-less person who remains by her friends sides no matter the challenge. Incredibly self-aware and confident. She is a true- believer and sometimes her truths seem like judgement passing on the other woman.

BRIELLE (Female, 21 years old). From Reynolds, Wisconsin.More secure in who she is and where she sees herself going in comparison to the other girls. Makes the informed decision not to stay in school since she didn’t feel set on a major. She now works at the bowling alley to save money.She and her boyfriend are planning to get married and leave the area. Super well-adjusted. Not easily ruffled. She is smart.Sarcastic. Wry. Although a great people-person, if someone is rude, she has no problem making jokes at others expense. Perhaps she’s passive aggressive, but otherwise lovely. She is a step ahead of everyone else. She is no one’s fool.

MADDY (Female, 19 years old.) From suburbs of Chicago. She is SAM’s acquaintance from Ohio State University. Seeks SAM out as a friend because she knows she will honor her privacy. She is the outsider in the other girls’ space, but she never senses this. Book smart, well-researched, well-adjusted, liberal minded, well-intentioned but clueless. She went to New Trier and wanted to go to Northwestern or even Kenyon, but ended up “having to settle for Ohio State”.She is confident on the surface but completely insecure underneath. She is self-medicating with drugs and alcohol due to a recent abortion over Thanksgiving break. She’s heartbroken that the guy doesn’t care and lacks the maturity and knowledge to reach out for help. We empathize with her plight. She is lost and has no clue what the next steps are. Maybe if she pretends nothing happened and just keeps saying she’s okay, she will be.Maybe.