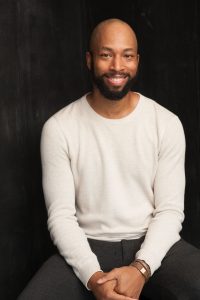 A native of Washington, DC, Mark H. is a director, performer and educator with a primary focus on American theater and theater of the African diaspora. His directing highlights include Julius Caesar, The Escape; or, A Leap for Freedom, King Lear, The Cherry Orchard, The Henry Dumas Project, and Dontrell Who Kissed the Sea. Along with directing, Mark has worked extensively as a professional actor with some of the nation’s leading theater companies. His most recent theater credits include We Are Proud to Present a Presentation… (Artistic Producer) and Ms. Blakk for President (Assistant Director to Tina Landau), both with Steppenwolf Theatre Company, as well as Deep Blue Sea/ (Dramaturg), a special collaboration with dance legend Bill T. Jones, Elizabeth Diller and Peter Nigrini. Mark received his BFA in Acting with high honors from Rutgers University, was classically trained at Shakespeare’s Globe Theatre in London, and is a graduate of the MFA Directing program at Columbia University School of the Arts, where he was the Dean’s Fellow. Mark is currently Assistant Professor of Directing and Acting at the University of Wisconsin-Madison.